Why do people chose to be leaders?

At the most basic level, there are only two reasons why people become leaders. These are responsibility and rewards.

The first reason is that they want to serve others, and do whatever is required of them to serve the people they lead well.

It’s understood that sacrifice and suffering are requirements in the leadership journey, and that “service” is the only proper motivation for leadership.

It’s the understanding that leading is a difficult challenge, and although it isn’t without elements of personal gratification, rewards are not the point.

Unfortunately, the primary driver for most young people (and far too many older ones too) are the rewards that come along with being a leader.

People who are motivated by these don’t take on the true demands of leadership especially when they don’t find a direct connection between doing their job, and then getting the rewards.

That unfortunately means that they usually decide on how they will  spend their time and energy,  based upon what rewards they are going to get. This is in contrast to doing their actual job, which is meant to be serving the people they are supposed to be leading.

The end result is that reward-centered leaders end up delegating or ignoring things that only a leader can address, which will leave a painful and destructive vacuum.

The biggest problem in this instance is that most of these ‘leaders’  don’t understand that their motivation is flawed.

No single leader is responsibility-centered all of the time. Everyone  has moments of weakness, and struggle to rise up to the challenge of doing the right thing all the time.

However, you’ll have one motive that is your default setting, and it will make all the difference.

Some leaders believe that developing their team can be done by the head of HR. This is not good because when you outsource the development of your team to somebody else, the said people that you are the leader of are not going to take it seriously. The message they get is that you don’t see the development of them as a priority.

There are reasons why intelligent leaders would allow somebody else to assume the responsibility for building their team. Perhaps they don’t believe it’s central to the success of the organization. This, of course, is a huge mistake.

Second, leaders realize that effective team building includes emotional, and many times, uncomfortable, conversations. Why go through that ordeal with you could just as easily have somebody else deal with it?

Even more scary is that some leaders don’t even bother to delegate this task to the head of HR, they completely ignore it.

Some reflection questions to consider

Do you feel like developing your team is a waste of time?

Do you organize “team building” exercises that are fun, but mostly ignore the difficult developmental and behavioural conversations that you should be having alongside the team building?

If you answered yes to any of these questions, you might be a reward-centered leader, and perhaps you should even think long and hard about whether  a leadership role is the right fit for you.

Managing Subordinates (and Making Them Manage Theirs)

There’s a difference between managing team members as individuals and dealing with them collectively as a team.

When you deal with them collectively as a team, you ignore many of the responsibilities that you have as a leader.

Managing individuals is about helping each one of them set the direction of the work they do, and also making sure it is aligned with their peers, understood by their peers, and then importantly staying informed enough to identify obstacles and problems as early as possible.

It is also about providing the right kind of coaching that focuses on the behaviors that will make it more likely that they’ll succeed.

No matter what you read in other leadership books, your job is not to simply set the vision for your team and then sit back and wait for the results to come in.

True leadership is about rolling up your sleeves, and making sure that the right work is getting done, and that you help your team  correct themselves all the time.

This is not far from micromanagement, it is doing your job as a leader.

In fact, your responsibility goes even deeper, you must ensure that the people you lead directly (your direct chain of command) are in turn leading those under them in the exact same way. There is a high probability that some of the people that you lead will have dangerous reward-centered propensities, and you need to carefully manage this situation.

This will lead to an entire organization that is aligned, and moving  in the same direction every single day.

Some reflection questions to consider

Do you believe that providing one-on-one guidance and coaching to your people is beneath you, and that your time is more valuable?

Do you think that you should be able to trust your team to manage themselves?

Do you justify not knowing what your direct reports are doing by claiming you don’t want to micromanage them?

If you answered yes to any of these questions, then you may be a reward-centered leader.

You should get more involved in coaching your direct reports.

Having Difficult and Uncomfortable Conversations

One of the biggest responsibilities a leader has is to confront the “difficult” issues swiftly, and then quickly resolve them with clarity.

If you are going to change the behaviors of an entire organization (which is one of your most important leadership responsibilities), you need to do it first with the people who directly report to you.

This will require you to possibly have difficult conversations, that if not handled properly, can destroy relationships and companies.

Conversations, that if handled with skill and care, can actually lead to stronger and more resilient relationships and companies.

Would you rather accept your team’s damaging behaviors than have a potentially emotional and awkward conversation with them?

Do you complain about your team’s poor behaviors with others  rather than dealing with them directly?

If so, you will need to adjust your expectations around the “comfort level” that you are supposed to have in your role. You will  need to dig deep and find the courage to start having those difficult conversations, until they become second nature to you. 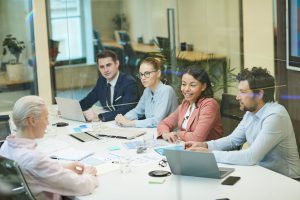 Meetings are one of the most unpopular and underestimated activities in all of business.

He asks us to think about the best place to observe whether a surgeon, teacher, or quarterback is good at their job. Of course, it’s to watch them during an operation, during a live class, or in a game.

Unfortunately, we’ve dealt with bad meetings for so long that most people simply accept them as a cost of doing business (or keeping their job).

Do you complain about your own meetings, and cannot wait for them to be over?

Do you allow your team and possibly even yourself to “zone out” during meetings?

Do you sometimes let people miss meetings so they can attend to “more important” work?

If so, you might have a problem with your leadership motive, and you have two choices. You can spend the time and energy required to ensure that your meetings are focused, and when required, intense., or you can resign yourself to poor decisions, lower levels of creativity and problem solving, and ultimately poor performance.

Communicating Constantly and Repetitively to Employees

Studies have shown that employees have to hear a message seven times before they believe that executives are serious about what they are saying.

This probably says as much about poor executive follow through as it does about employee cynicism.

It does however  bring home a critical point, that leaders need to communicate constantly and repetitively in order for the message to be heard.

Good leaders get creative and find different ways of saying the same thing. They are however much more concerned about employees being informed, than they are about them being entertained.

Do you hate having to repeat yourself, and complain to others that your employees don’t listen? Do you continuously look for new messages and ideas to communicate because you are bored saying the same things over and over?

If so, you might be a reward-centered leader. If you want to fix that, you’ll need to change your attitude about communication and see it as one of your most critical tools for helping your team understand and internalize important ideas, rather than a vehicle for your own entertainment.

The new norm starts with leaders embracing responsibility-centered leadership, and modelling it for everybody to see. From their direct reports to their friends and family, they all need to see strong leaders who do the difficult things with joy.

Only then, will we see companies becoming more successful, employees more engaged and fulfilled by their work, and society becoming more optimistic and hopeful.

We will know the problem is solved when people stop using the term “servant leadership,” because this will be the only valid kind of leadership.